Or would that be tail = cun? 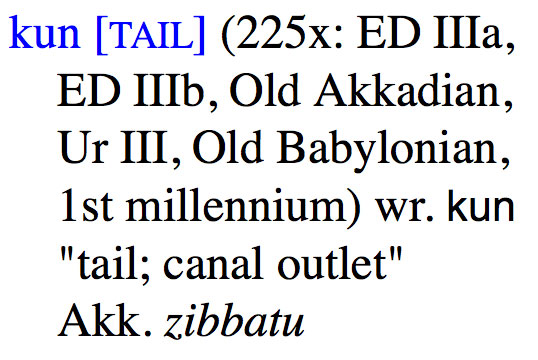 The word “tail” has many meanings, but on an animal it is a flag to say, “Here is where the important stuff is.” A tail on a woman would be her vagina or her bottom. “I’m gonna get some tail,” is a fairly common phrase for “I’m going to get some pussy,” which is also euphemistic for “I’m going to put my penis in a woman’s vagina.” The slang term for “vagina” is “cunt,” which isn’t far from “kun.” 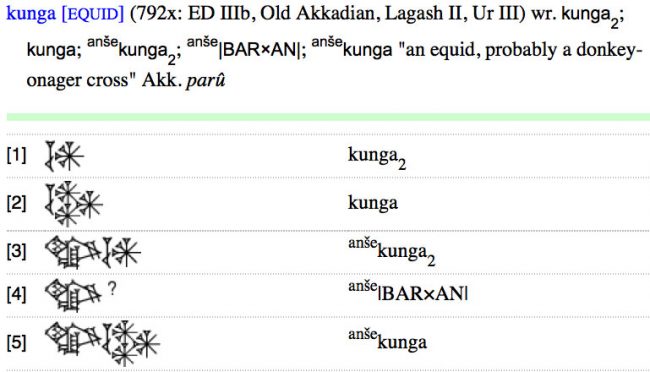 “Kunga,’ merely one of the many Sumerian words for “donkey,” demonstrates that the Sumerians appear to have loved donkeys. An equid is one of the few Sumerian characters that is depicted with a face (see “Talk Dirty to Me in Sumerian”). The star, (highlighted in yellow) which makes up this word “kunga,” is the recognized sign of a deity (I think it also means “milk”), so this shows that equids were special. Another word for “equid” is “anshe,” which also includes a star character. This animal was the pinnacle for the Sumerians. 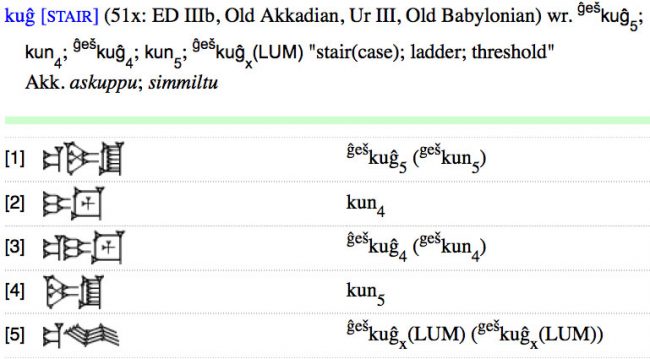 A “kunzida” is a dam (a more common term for “weir”), and wives in Sumerian were referred to individually as “dam” (see “Vaginas depicted in Sumerian: a database with commentary). “Dame” is still a word we use for women. “Damen” is “women” in German; “dam” is “blood” in Hebrew,” which is what comes out of a woman’s “dam.” We’ve just traded the same group of words around for similar concepts. Words trade dependent upon how a society views the object in question. If you revere cats, you call them some version of “meow” as the Chinese and Ancient Egyptians did. If you don’t, you call them “cat” as we have done. Some people revere cats now, but they usually give their cats individual names. The sound pattern cat typically means (in many cultures) something small that can reproduces (see “‘Meow’ is just another name for ‘Cat’”).

The above word is pronounce kung (because the caret over the “g” means one makes this sound: ng—and this is just one of the reasons why this stuff is hard to figure out. I’m sure the jargon keeps many out of linguistics. A stair might not seem a lot like a donkey or a dam, but if you take “the map view,” which is to enlarge your sense of congruence to include conceptual congruence, both a dam and a set of stairs are outlets, and the Pennsylvania Sumerian Dictionary also includes “threshold,” in this “kung” word. The donkey, being the pinnacle of Sumerian animal preference, is at the top of the stairs where the stars are, where King-Kong is. “Kung” is king, and kings get cunts.

In Akkadian, one sound pattern for stairs is simmiltu: each stair is quite similar to the next. The Akkadians picked out a different quality to label a set of stairs than the Sumerians who wrote “kung” 51 times. A stairway is a passage, as are several orifices on the human body. Previous cultures were much more animalistic than we are (or like to believe we are), and they call an object by the name that they consider a relevant characteristic of that object. It turns out that the sounds and drawings for particularly relevant ideas fall into a groove across all cultures because sex and procreation were that important to early man. Tail – kun to stair – kung only differs in of the addition of the “g” sound. “G” is an aggressive sound because it is the sound of growling and swallowing. To swallow one had to have food. To have food, one generally had to kill something. They weren’t called “hunters and gatherers” for nothing. Sexual boundaries were pretty clear back then, so the hunters were most likely men (due to testosterone), and the gathers, women; however there were five female kings in Egypt, so the fact that Egypt had the most equity to be found in early civilizations could explain why it lasted so long.

It’s hard to be a female king though if language is constantly reminding women that our bodies are the thing that is important and not our minds. Do you ever ask yourself, “Why isn’t ‘cunt’ spelled with a ‘k’?” Because that would be kooky. That would give too much significance to the word. “K” the symbol signifies mostly for things are elevated. “C” the symbol signifies for mostly things that are curved and short. “Kunt” with a “K” reminds us of the KKK, or kites (which fly high), or keys (which open doors), or kangaroos (a word from another language that signifies for an animal that jumps up). A kitten is elevated, a cat is old news. We like the new.

Because “C” often has the sound of “S,” people use “K” to mean the the hard consonant. Yet “K” mostly shows up in words of elevation or in words from other cultures (kamikaze, Kahlua, khaki—Persian for “dust” or perhaps “caca”—and “kick,” which we think is “our” word, but it’s from unknown origin according to OED).

Letters, words, the organization of the alphabet has been honed by a multitude of people using it. It is not happenstance that the word “cuneiform” begins with “cun” because in both our culture and in Sumeria, the c/kun sound meant “outlet.” Outlets tend to come in “V” and “U” shapes. Think bay or portal. “Cuneiform” is named because “cunei” means “wedge-shaped.” A wedge is a pie shape. A pie is a “V” shape. It all comes back to bowls or troughs eventually (see below).
There are a few core ideas, and these ideas are constantly enlarged upon, syllables added (which have their own basic meanings), but ultimately, things can be distilled into shape significance, sound significance (both of which have been honed for a long time), or monarch significance (where a king or ruler dictates a language change, as in 15th century Korea where King Sejong created Hangul, the Korean alphabet, and published it in 1446; or in the 1950s in China when the People’s Republic simplified the Han characters). Meaning gravitates toward particular sound combinations. A bun and a cun are reflections of each other. Concave and convex. In a world where women are their body parts, how far away is the word “hun”? Bunny, cunny, honey. 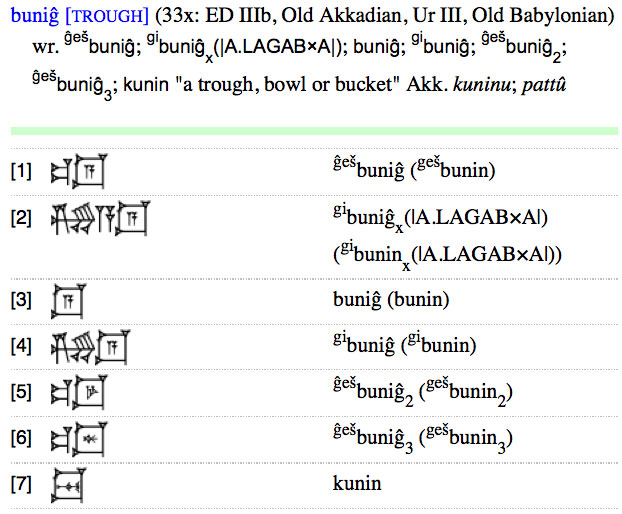 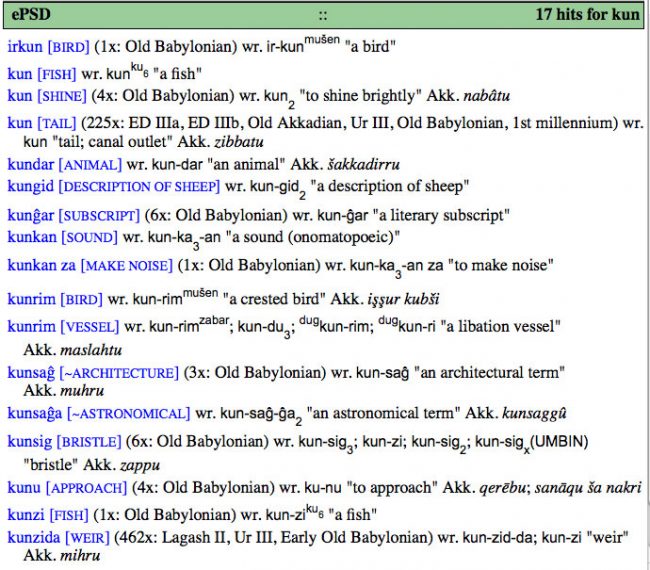 Cuneiform and definitions are from http://psd.museum.upenn.edu : “The Pennsylvania Sumerian Dictionary Project is carried out in the Babylonian Section of the University of Pennsylvania Museum of Anthropology and Archaeology. It is funded by the National Endowment for the Humanities and private contributions.”