Duh, I own it: Possession is Universal

Portraying ownership was one of the first usages of writing. “This is mine” was inscribed on many items from the past, including Etruscan1, Mayan, Chinese, and European.

The two-character as well as two-letter sound “de” means “possession” in Latin as well as Chinese.

The 勺 character on the right is historically a spoon or a frying pan with something in it, or a “wrap” around something of value. Anything that one possesses is of value—that’s why one possesses it. If it’s in your frying pan, so much the better. Possession was huge to early man, so this is a basic concept. When “white” is added 白 to the left side of this character, it changes from “spoon” to ownership and “bull’s eye.”2 Consider that an eye is a kind of target (“don’t shoot until you see the whites of their eyes”), and this “de” character is all about getting what you want—into your frying pan and into your belly! But sometimes the target is not for food but for sex. The hard part of this theory (that female mammals are the root of written language: www.OriginofAlphabet.org) is that on occasion (but not always occasionally) it was both. People had to learn not to be cannibals, especially to spouses. Darwin says that in Terra del Fuego, the indigenous people claimed they ate their older women when they were starving before they ate their dogs because the women were less important than their dogs. (My husband says this is only because the dogs could run faster.)

The Chinese word for “ugly woman” 媸 is pronounced the same as the word “to eat” 吃 the implication being that ugly women are only good for food. When men see women only has a vehicle for the production of children, as only as valuable as their fertility, they view them as they view other livestock. When that livestock can no longer produce, you eat it or dispose of it. Women have been conflated with beasts for a very long time. In Chinese “horse” is 马 and “mother” is 妈 the difference is as subtle as tone 3 to tone 1, but they are both beasts of burden.

According to the Modern Chinese Character Frequency List3 的 is the most frequent Chinese character. Important concepts tend to be ubiquitous. And possession is very important. Women have learned to share their bodies because they didn’t have a choice. They share them with men and with babies growing inside them. Men are more possessive, therefore they share less well. Sharing less well means more mechanisms are created for delineating ownership: writing, walls, fences, houses, code, laws, educational systems, etc.

If we couldn’t own things some things, society couldn’t exist. However, “you can’t take it with you.” 4

If you put the radical found in “cat” 豸 in front of 勺, you get 豹 “leopard.” Now, a leopard aims for its target, it gets what it wants, and its coat has spots on it similar to the dot in the wrap. Leopard “bao1” rhymes with cat “mao1,” another predator. It’s easy to write these off as coincidences, but when there are thousands of coincidences in early language all in the vein of ownership, control, sex, and women, one asks are they coincidences or are human beings simple? I’m going with humans are simple. We want what we want (especially possessors of testosterone), and we emulate animals that are predatory and strategic.

The Mayans, another early culture, also cared about possessions and jaguars (an animal that looks like a leopard). Michael C. Coe devotes more than two pages on the Mayans love of “name-tagging,” as he calls it, in Breaking the Maya Code, pages 245-246: 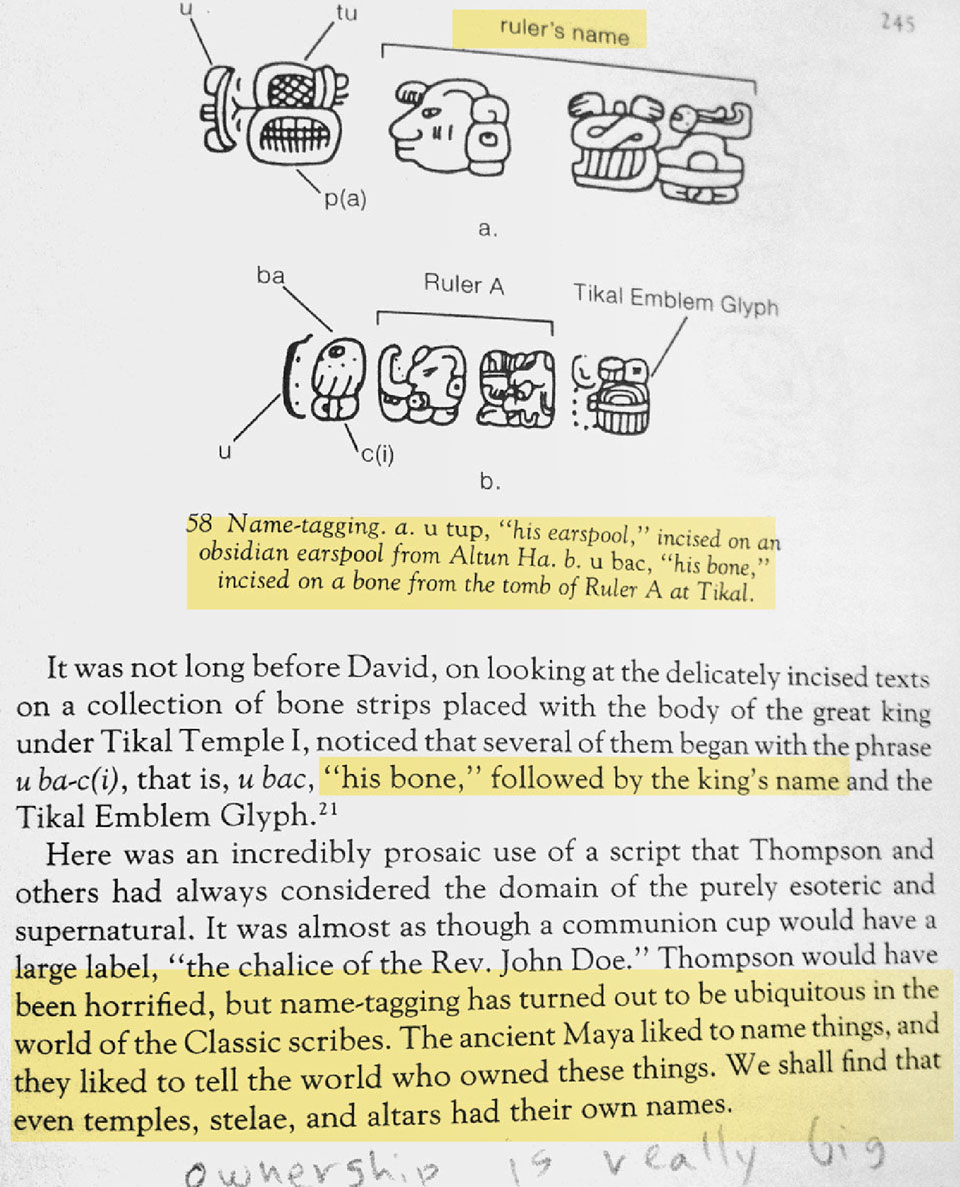 When I mentioned in my Mandarin class the universality of “de” to mean possession, that all Latin-based languages use of form of “de,” the teacher said, “No.” A classmate said derisively, “Well, if we knew Latin…” but of course, living in California, we all are exposed to Latin in the form of Spanish on a daily basis. Avenida de las Pulgas in San Mateo is “Road of the Fleas.” Even the fleas have possessions.

There’s Cinco de Mayo, the fifth of May, which we associate with drinking margaritas (and is not Mexico’s Independence Day5. There’s San Francisco’s Mission de Assisi. There’s De Soto and De Haro streets, and Galería de la Raza in the heart de la Misión. Worldwide there’s Ponce de Leon, Gare de Lyon, fleur de lis, fer de lance, Marquis de Sade, and pomme de terre. Even “duh” means knowledge that should have been in one’s possession (“Did you know he’s hot?” “Duh…”); and Homer Simpson’s “doh” is the acknowledgement of the ownership of a stupid moment.

Dum-de-dum-dum is the approach of something ominous, “death” perhaps, which you’ll notice starts with “de” because “death” would seem to be “of earth.” OED says, “The history is not quite clear.” Perhaps because we choose not to know.

If we’re talking possession, and the fact that women knew true possession in the form of the baby growing inside their uterus, then the fact that “of” sounds like /ov/ suggests that “ovary” is the true literal origin of “possession”: ovary, ovum, ovulation, oval, etc. Ovi means “sheep”in Latin, and Greek, and again we have a woman conflated with an animal or a “she/sheep” relationship.