Notes taken and commentary (marked by “Note:”) by Jennifer Ball (because of the typeface, Adobe Fangsong Std, which I must use to render the Chinese characters correctly, extra spaces are seen after apostrophes and quotes).

Ms. Mau was born in Shanghai, and speaks Mandarin, Shanghainese, and Cantonese.

Chinese is a filtered language based on Cantonese. (My note: this makes sense because there appear to be more phonemes in Cantonese; more phonemes = older). Note: Remember that written q = ch sound, x = ts 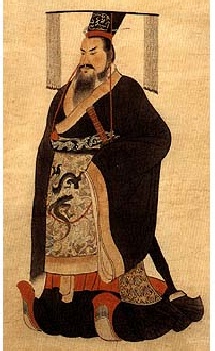 Qin2 Shi3 Huang2 秦始皇 (259 BC – 210 BC),personal name Ying Zheng (嬴政) was king of the Chinese State of Qin from 246 BC to 221 BC during the Warring States Period.He became the first emperor of a unified China in 221 BC. He ruled until his death in 210 BC at the age of 49. After unifyingChina, he and his chief advisor Li Si passed a series of major economic and political reforms. He undertook gigantic projects, including the first version of the Great Wall of China, the now famous city-sized mausoleum guarded by a life-sized Terracotta Army, and a massive national road system, all at the expense of numerous lives. To ensure stability, Qin Shi Huang outlawed and burned many books and buried some scholars alive. (Wikipedia.)

Miao2 苗 : “Women are leaders, pick their own husbands. Take a small boat for four hours to mountains of Miao. If any one pinches you, don’t respond.” (For more info on theMiao character, see “‘Meow’ Is Just Another Name For ‘Cat,’” www.originofalphabet.com.)

(Note: Yao2 used to be written with the dog radical 猺 which you can see on the left.A radical is just the ballpark category that is depicted by the character, in this case: dog. The sound or phonetic component is typically on the right. In the 1950’s the dog radical in many words was removed as part of the simplification process—ethnicities were no longer delineated by an animal character. For more info, see: www.hcs.harvard.edu/tempus/archives_files/Brown.pdf.)

Dai3 傣族; pinyin: Dǎizú): pour water on you. Soaking wet: popular; dry: not so popular. (No internet info on this practice.)

Stroke order: Up to down, left to right, outside to in.

Colon instead of comma to before a quotation mark (speech).

“In Mandarin, 250 can mean “imbecile” if read in a certain way. 二百五 (èr bǎi wǔ)…alternative ways such as 兩百五 (lǐang bǎi wǔ) and 二百五十 (èr bǎi wǔ shí) do not have this meaning. There are several different versions of the origin of the use of 250 as an insult, and it is unclear which one is correct.

( I will notate traditional/simplified with a slash and no words from now on for the characters that have both.)

To address a letter to someone in China:

Nian2, the beast that comes at New Year:

According to Chinese mythology, a Nian (simplified Chinese: 年兽; traditional Chinese: 年獸;pinyin: nián shòu) is a beast that lives under the sea or in the mountains. Once each spring, on or around Chinese New Year, it comes out of hiding to attack people, and prefers children.Weaknesses of the Nian are purported to be a sensitivity to loud noises, and a fear of the colour red. The Chinese Lion Dance is known to have originated from the legend of the Nian. The tradition has its origins in a story of a Nian’s attack on a village. After the attack, the villagers discussed how to make the Nian leave them in peace. The traditions of firecrackers and red robes found in many Lion Dance portrayals originates from the plans the villagers had in which drums, plates and empty bowls were hit, red robes were worn, and firecrackers were thrown, causing loud banging sounds that they hoped to intimidate the Nian. According to this same myth, the Nian has not appeared in the village again. (Wikipedia)

A southern style nian in the lion, unicorn, and ox style (Ming)

Note: The Chinese words for “ox” 牛 niu2 and “monster”年nian2 begin the same and their characteristics are similar: both are violent beasts affected by the color red. Both written characters are similar to each other and to“life/ birth” 生, which is a violent act performed by a nü3 女, a woman, who has an association with blood and redness. Niu, nian, nü are close in pronunciation. Could women have been equated with beasts? Compare:ox, monster, birth: 牛 年 生

Shui jiao yi wan duo shao qian can mean: How much does a bowl of dumplings cost? or How much does it cost to sleep with you for one night? depending on different intonations.

Think “pig,” “pudge,” or “pygia” as in “steatopygia” which means “fat buttocks.” The Khoisan of Africa, formerly known as the “Hottentots,” had steatopygia, which allowed the women to carry their children comfortably on their buttocks (see Stephen J. Gould, The Flamingo’s Smile). O.E.D. says the word “pygmy” comes from “fist,” but I believe the word relates more broadly to something that is triangularly shaped or sticks out. Borror’s Dictionary of Word Roots and Combining Forms shows that all the words in the vicinity of “pyg” mean “pelvis,” “rump,” an animal (eagle, antelope, or insect), “fist,” “dwarf,”“orifice,” “pus,” “pear,” “fire” (pyre), or “pyramid,” the queen of triangularly shaped objects. Even a python coils up to make a pyramid.

屁 (pi4) = break wind; fart; buttocks
The character on the left means “corpse” or “bottom.”This character appears to have something coming out of the bottom.

The character on the left is the “moon” radical, but it means “flesh.”

From “‘Meow’ Is Just Another Name For ‘Cat’”:
One note about the flesh radical: it almost always looks like the moon, though it’s “official” depiction
looks more like a suggestion of ribs and a spine enclosed in a body (see next page). If you consider that the best eating on an animal is the rump, and that mooning someone is to show your rump, a relationship
can be seen between moon and flesh: the whitest part of the body is the part one keeps covered.

The moon radical is often used for the flesh radical inChinese. This is both a simplification—note the similarities in orientation and horizontal “stripes”—and a kindness. The moon is easier on the eyes and conscience than seeing actual flesh.

Ms. Mau described “u” and “ü” as “two sisters who never get along.” This is probably because in Chinese, two women characters mean “quarrel.” Three women mean “adultery.” For 4,000 years. The idea of the perpetually angry or bad woman is 5,000 years old (perhaps older, but we only have 5,000 years of written documentation). No doubt women were angry because they were not in charge of their own destiny, instead controlled by others. Limiting women’s sexual choice was so important that the same trio has meant wickedness for 4.000 years. Perhaps we can learn Chinese while keeping in mind the pervasive sexism that exists in all language (because of the times in which the language was created), and try not to perpetuate stereotypes. However, this vein of sexism can be exploited by the language learner when one realizes that a pattern—based on fertility, domination, and preservation of seed—runs through all language and can be used to acquire a foreign tongue faster.

Think about a Mrs. at a time of no birth control. These two “tais”represent breasts. “Tài tài” means “too much, too much” or“extremely, extremely,” which is a euphemism meaning “large breasts.” In the Egyptian hieroglyphs, “milk” translates as “irtt” which meant “to make tt.” “TT,” “tai tai,” “titty,” “teat,” “tit” all signify for mammaries. In Hebrew, the unvoiced “T” changes to a voiced “D” and the word for “nipple” is “dad” or

:
All are symbols for breasts. Symbols are meaningful shapes that have softened into a design we recognize but can’t completely recall, so the dirty underpinnings of that design don’t trouble us. Until we start to see a pattern across all languages of body parts representing parts of speech.