It takes sharp eyes 色 to see at night 晚

Hao4 号 is oral only; written it would be ri4 日.How to ask the date:

Today is which month which date?

Tomorrow will be September, 15th.

The Chinese calendar is a lunisolar calendar, incorporating elements of a lunar calendar with those of a solar calendar. It is not exclusive to China, but followed by many other Asian cultures as well.[1] In most of East Asia today, the Gregorian calendar is used for day-to-day activities, but the Chinese calendar is still used for marking traditional East Asian holidays such as the Chinese New Year (the Spring Festival (春節)), the Duan Wu festival, and the Mid-Autumn Festival, and in astrology, such as choosing the most auspicious date for a wedding or the opening of a building. Because each month follows one cycle of the moon, it is also used to determine the phases of the moon. The year 2011 in the Chinese calendar is the Year of the Rabbit. It began on February 3, 2011 and will end on January 22, 2012. According to traditional beliefs, some form of the calendar has been in use for almost five millennia. Based on archaeological evidence some form of it has been in use for three and a half millennia. The year 2011 is reckoned in the seldom-used continuously numbered system as 4708 or 4648 (depending on the epoch used)…” (Wikipedia).

You would say, “Ni3 hao3” to your neighbor the first time, and then after that, something
else. Say instead:

Even more casual is: Ze3 me yang4?
What’s happening? What’s up? How have you been?

馬/马 – (traditional/simplified horse, ma3)
(Ms. Mau says this expression relates to kid’s cartoon, Xiǎo Mǎ Hǔ. I could not find any  mention of this on the internet.)

你离了吗？Ni li le ma?” using the ‘li’ from 离婚 lihun, which means to divorce! They’re not really asking “Have you divorced?” – it’s more a crack about how much the divorce rate in China has risen. It is still nowhere near the divorce rate in the US, but it is much higher than it used to be even 20 years ago!

These days some city dwellers instead of asking “Have you eaten yet?” ask “Where are you in traffic?”! (堵车 duche = to be stuck in traffic)

早 Zao3 = morning
(Ms. Mao says, “Tao is rude, so make sure to get the ‘Z’ sound in the beginning.”) There are 25 meanings of “tao” in all four tones. Possibly Ms. Mao means 檮 táo, which translates as “blockhead, piece of wood.” Or could she mean 饕 tāo: gluttonous? Or perhaps 討/讨 tǎo: ask for; send punitive expedition; to demand; to marry? A punitive expedition that ends in marriage is always rude.)

According to MandarinTools.com, ke4 also means “to woof.” 緙/缂. The question being does “to woof” mean “throw up” or “bark”?

U goes with everything except for what ü goes with, which is: j, q, and x, but when ü mixes with j, q, or x, the umlaut disappears.

知道 zhī dào (zhi1 dao4) = I know (this dao4 is the same as Tao, meaning “the way,” of Taoism, and you can see that there is a path in this character)

(Not sure what these words connect to; will find out.)

Ge is a general classifier for things. Like we say “two sheets of paper” rather than “two papers.”

I found this at urbandictionary.com when I was searching the above term:

Ms. Mau says, “Map of China looks like a chicken.” (I think the head is upper right.) 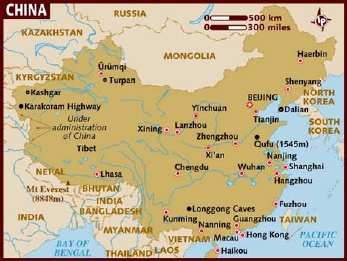 Note the similarity of the above three characters. All include a form of two rectangles which stand in for eyes. The “r” looking character on the first two means “horn” 角 or some kind of sharpness. It takessharp eyes to see both color and at night. In the third example, the radical on the left is a bull, therefore the character on the right in this instance resemble eyes, for the definition: bull’s eye. Note also that the second one, meaning color, is “se” in Pinyin, not far from the English word, “see.”