Hair as a Medium for Communication 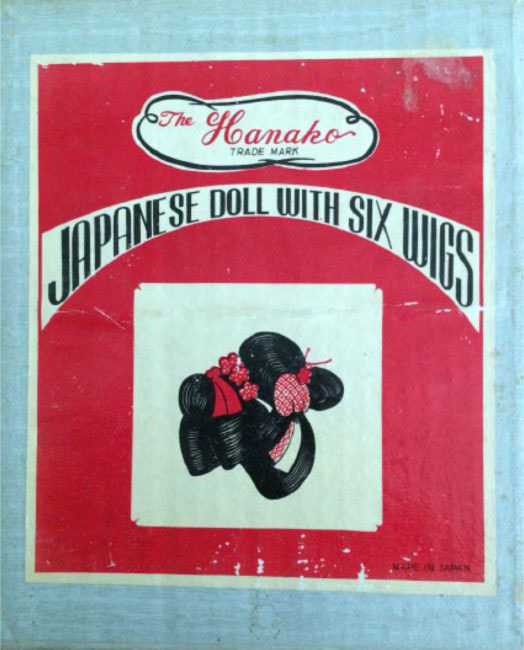 One’s hairstyle projects one’s status. Female hair telegraphs availability. Certain styles indicate “not yet: this wearer is too young to bear children.” Early communication was often about a female’s ability to carry offspring. 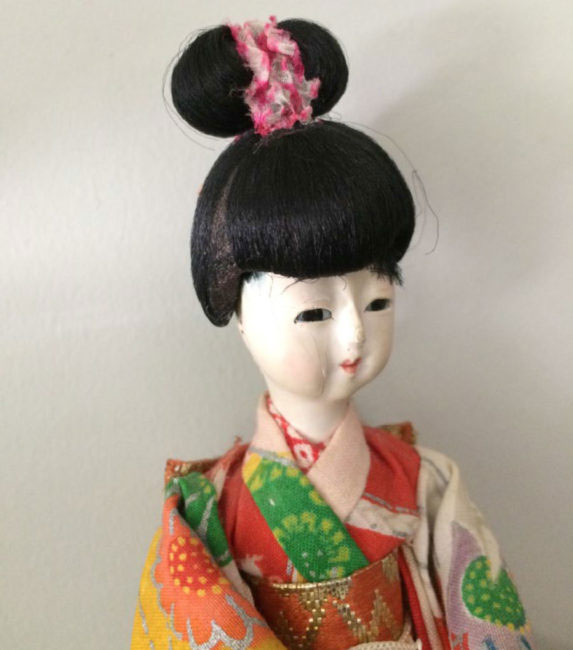 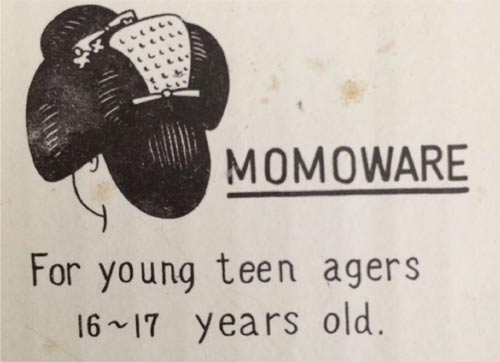 A chaste look, nothing dangly. 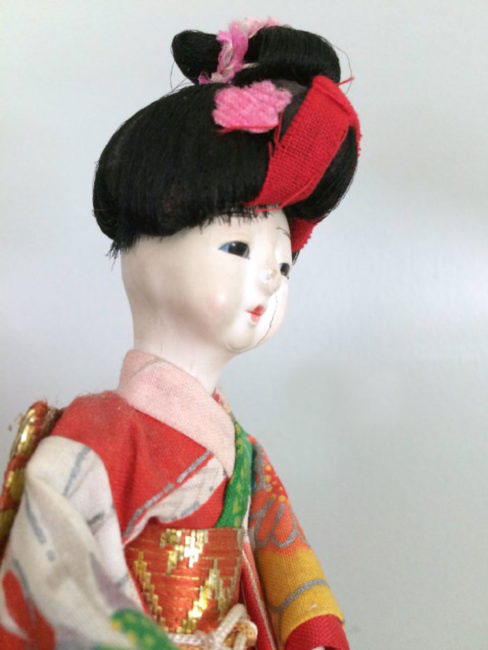 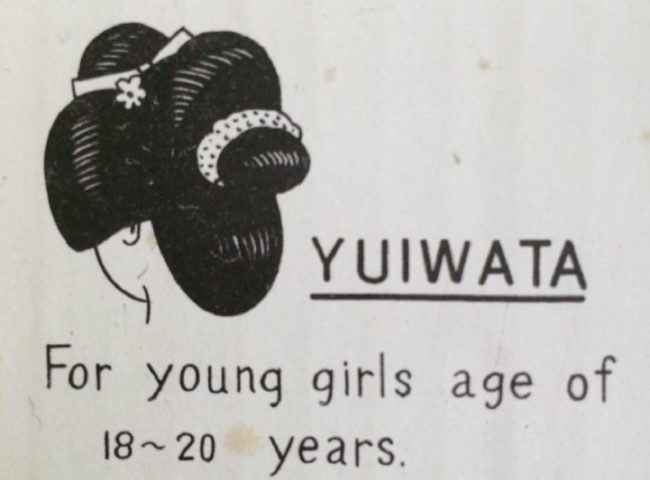 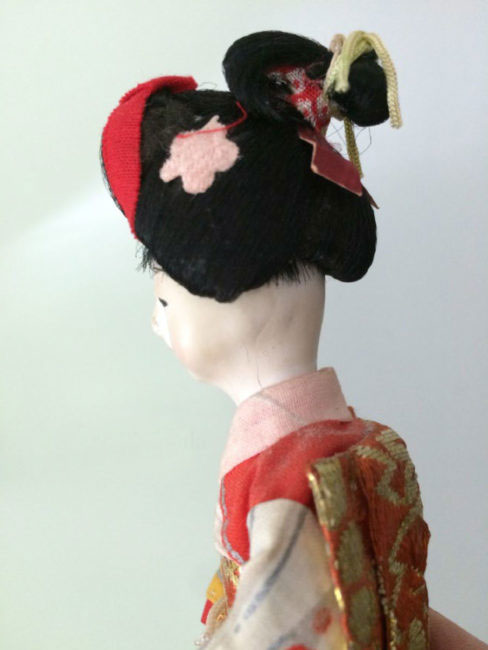 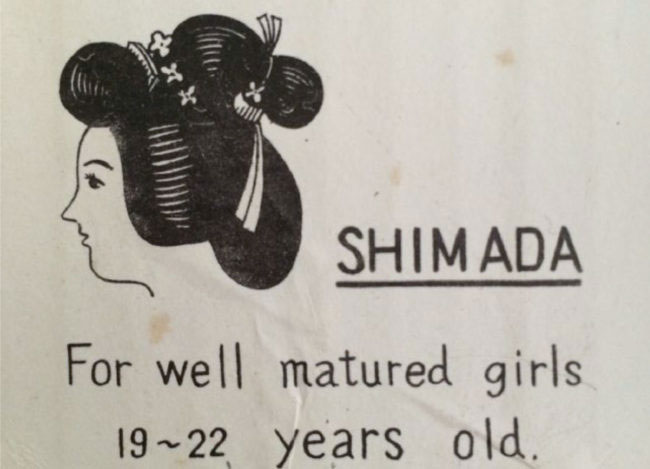 What do you suppose “well matured” means? 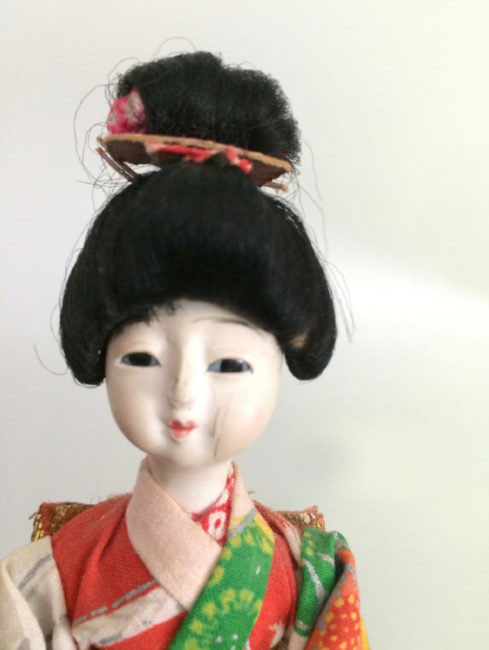 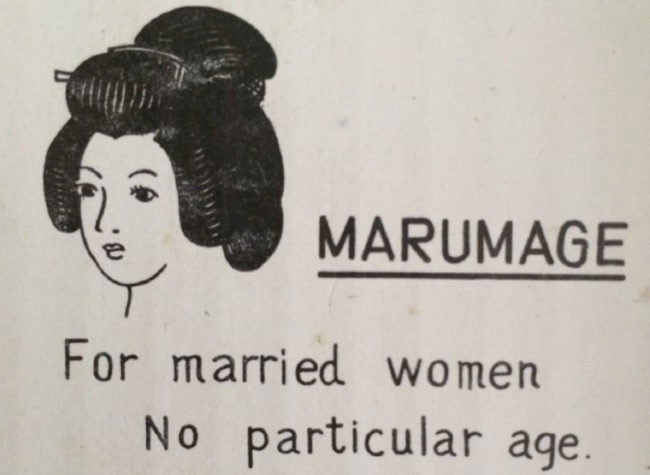 Once married, her age appears to be immaterial: she’s taken. 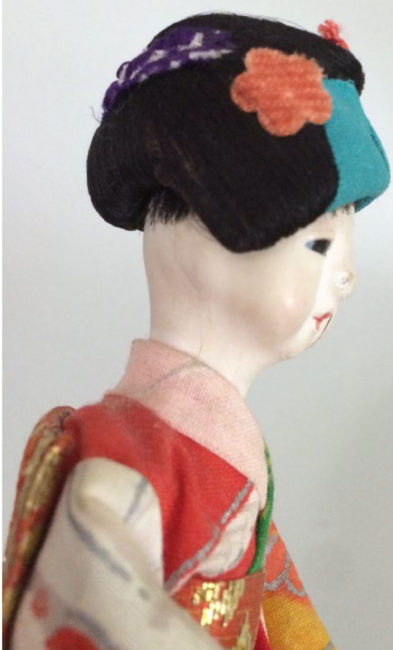 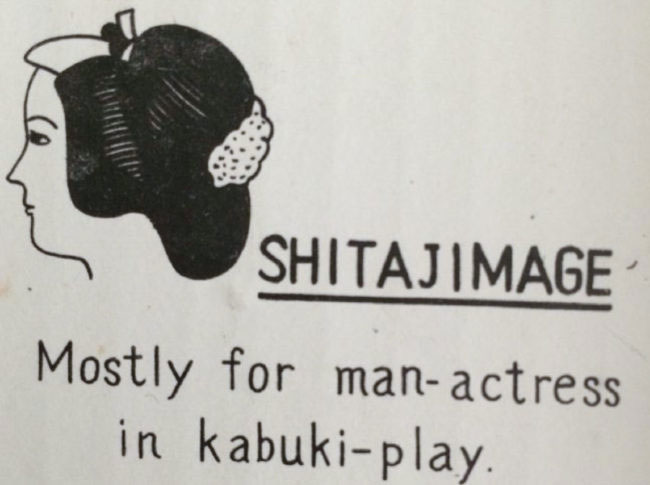 Men in women’s clothing and people falling down: the underpinnings of comedy. 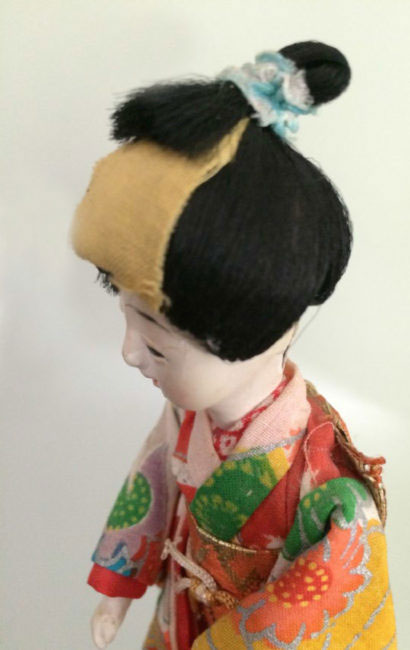 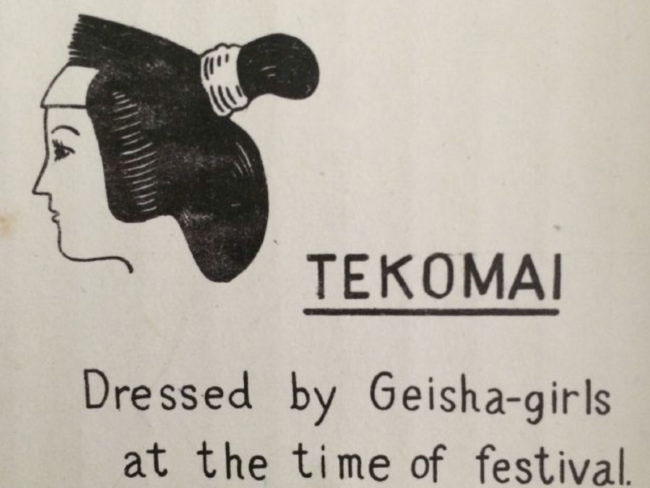 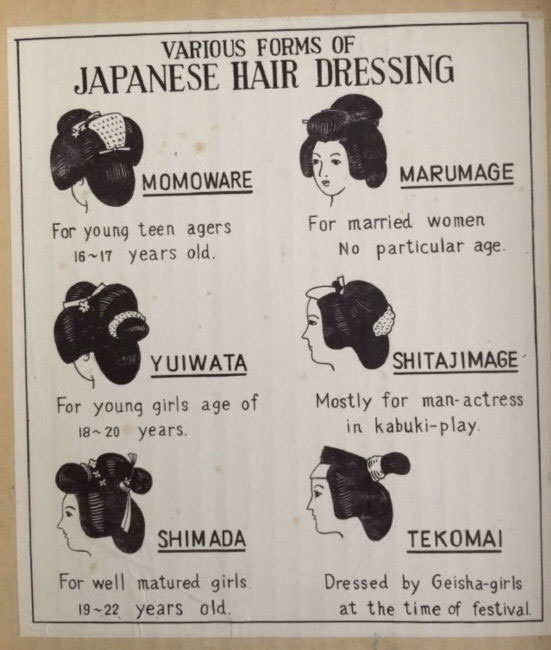 Inside of the lid of the box. 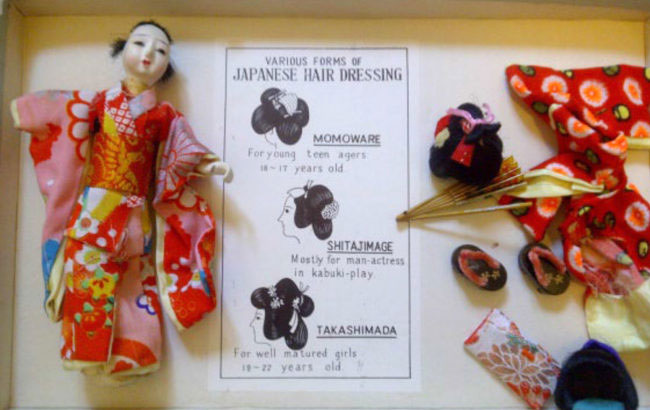 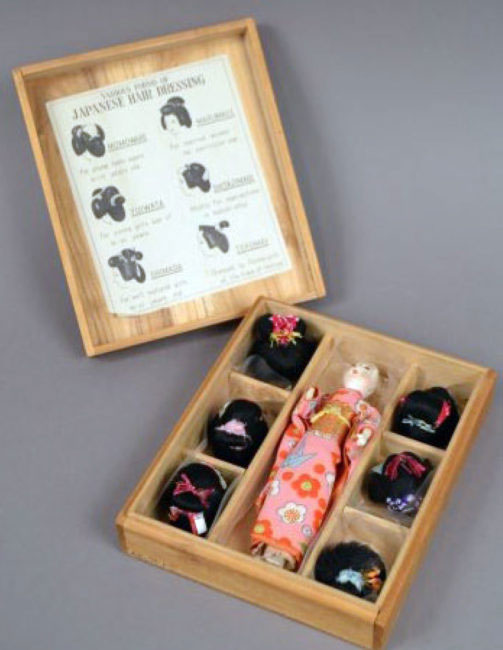 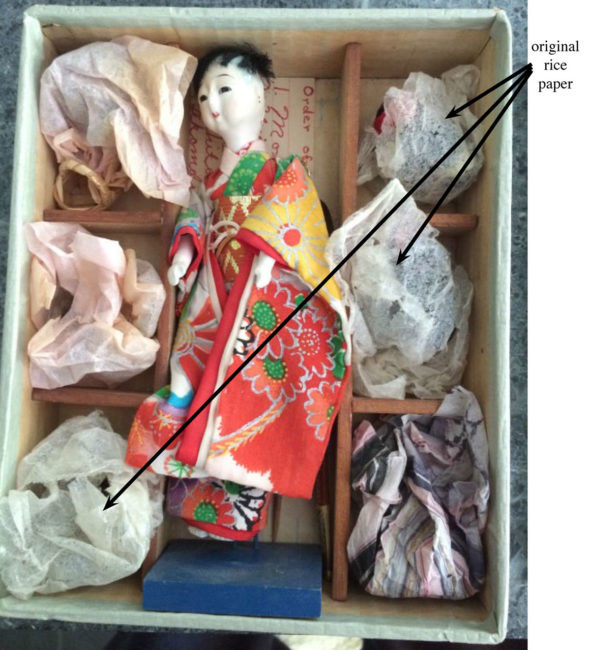 I have had this doll since I was 6 (1964). It made a lasting impression upon me. It also suggests a coherence in my life that I still have some of the original rice paper even though the doll is at least 41 years old. 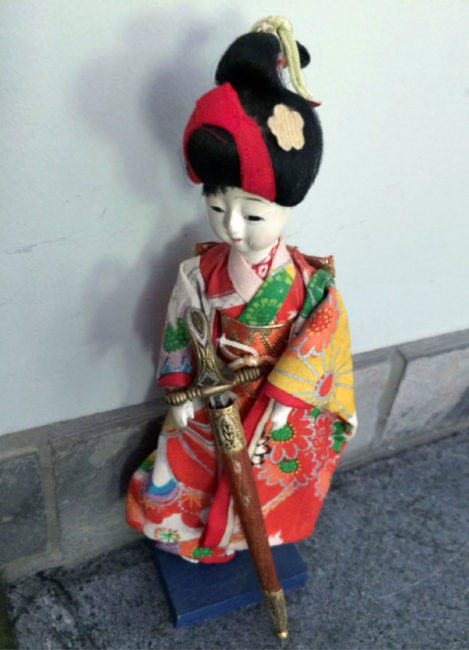 I preferred my geisha with a sword, which I bought in San Francisco in 1970, when I was 12 and in seventh grade.

Topknot is cut as a prelude to "deflowering." (There's no flower there... We call the hymen all sorts of names: "flower," "cherry." Why do we give women's genitalia the names of plants?)

From Wikipedia, the free encyclopedia: “Mizuage (水揚げ?, lit. “hoisting from water”) was a ceremony undergone by a Japanese maiko (apprentice geisha) to signify her coming of age. When the older geisha (in charge of the maiko’s training) considered the young maiko ready to come of age, the topknot of her hair was symbolically cut.

“During the Edo period, courtesans undergoing mizuage were sponsored by a patron who had the right of taking their virginity.1 Mizuage has also historically been connected with loss of virginity of maiko,23 but this practice became illegal in 1959.4 Afterward, a party would be held for the maiko.

“According to anthropologist Liza Dalby, mizuage was an important initiation to womanhood and the geisha world. Mizuage gave way to the next stage of training, the senior maiko. Once the mizuage patron’s function (of deflowering the young maiko) was served, he was to have no further relations with the girl.5

“The money acquired for a maiko’s mizuage was a great sum and it was used to promote her debut as a geisha,6 but this was not considered by geisha to be an “act of prostitution.”[citation needed]

“Mineko Iwasaki, a geisha that Arthur Golden met while writing Memoirs of a Geisha described mizuage in her autobiography as being an initiation party, symbolized on the geisha-to-be by a change in hairstyle rather than the loss of virginity.7 It is a celebration of the passage of girl (maiko) to woman (geisha).