Breasts are depicted in a variety of ways in cuneiform. This is a database of every example of breasts in cuneiform. The first example will be the dumu depiction, as seen above. Dumu means “child” in Sumerian more than 28,000 times. Could this word mean “of mother”? “De” means “of” or “belongs to” in Latin-based languages. In Chinese, “de” with no accent means “of” and it functions as a possessive; “de2” means “get, obtain”; “di4” means “bull’s eye”: a metaphorical description of possession. These meanings are all very close because possession, as we know, is 9/10s of the law. Imagine what possession meant before laws existed or even a fair adjudicator to enforce them.

Cuneiform and definitions are from http://psd.museum.upenn.edu : “The Pennsylvania Sumerian Dictionary Project is carried out in the Babylonian Section of the University of Pennsylvania Museum of Anthropology and Archaeology. It is funded by the National Endowment for the Humanities and private contributions.” 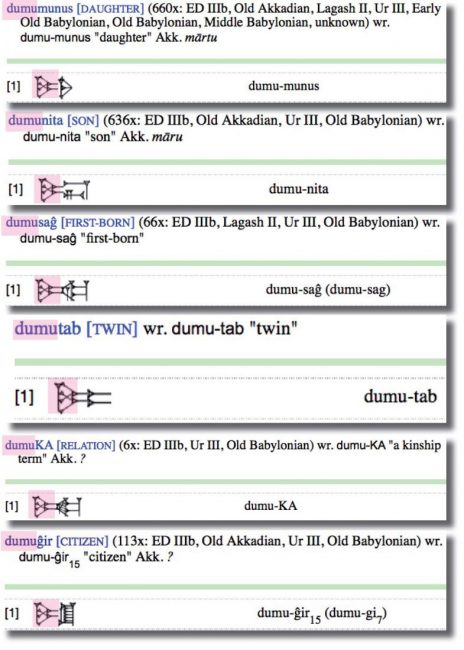 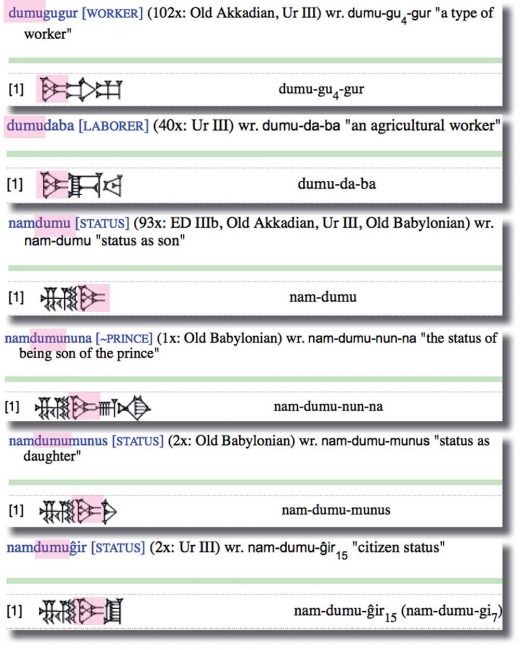 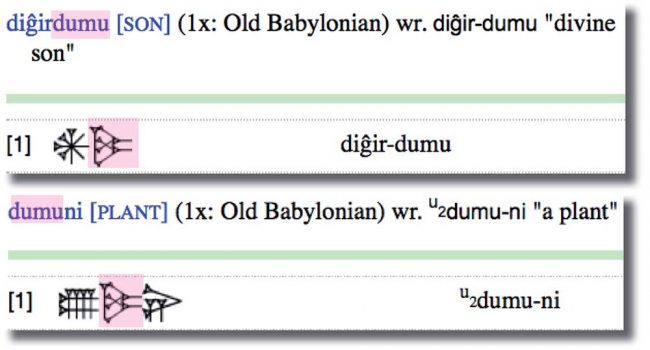 Breasts are important, so there are a variety of words that signifiy or are associated with them: ama, eme, didi, dumu, ga, gaba, gala, genna, nar, and tur.

No doubt there are more. 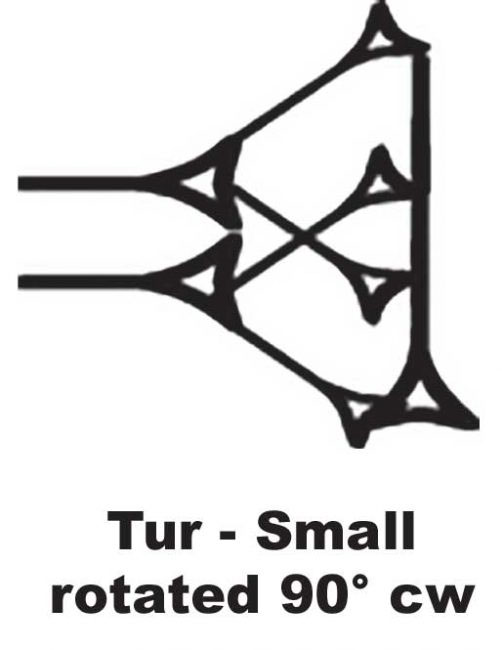 Tur—the next grouping—uses the same graphic as dumu, and the meaning is often breast-related, but this character is defined as “small” by the Pennsylvania Sumerian Dictionary. “Small” is a euphemism for “breasts,” but the meaning is “small.” Euphemism and metaphor are the ways in which humans could use pictures to stand for sounds and ideas: how we can read.
“Breasts as a metaphor” is a common motif because when something is important, everyone wants to be a part of that importance. Food was key in the beginning of man, and milk allowed for civilization to get a jump start. The ratio of a woman’s breasts to her physical size as measured with any other primate shows how significant the increased proportion meant to our culture’s survival. Comparing primates to all mammals shows that there was a evolutionary preference for the teats to enlarge, reduce in number to two, and to move to a more visible position. The eyes and the breasts have as close a relationship as do lips and breasts. Eyes of the male see breasts of the female and produce offspring whose lips receive life from those same mammaries. This underpinning of sustenance shows up in all scripts as a duple usually, a mound or t-shape repeated. The evidence of “breasts” being used metaphorically is seen in Sumerian words that signify for diminution (child, junior, offshoot, cub, small), kinship, and an association with milk. 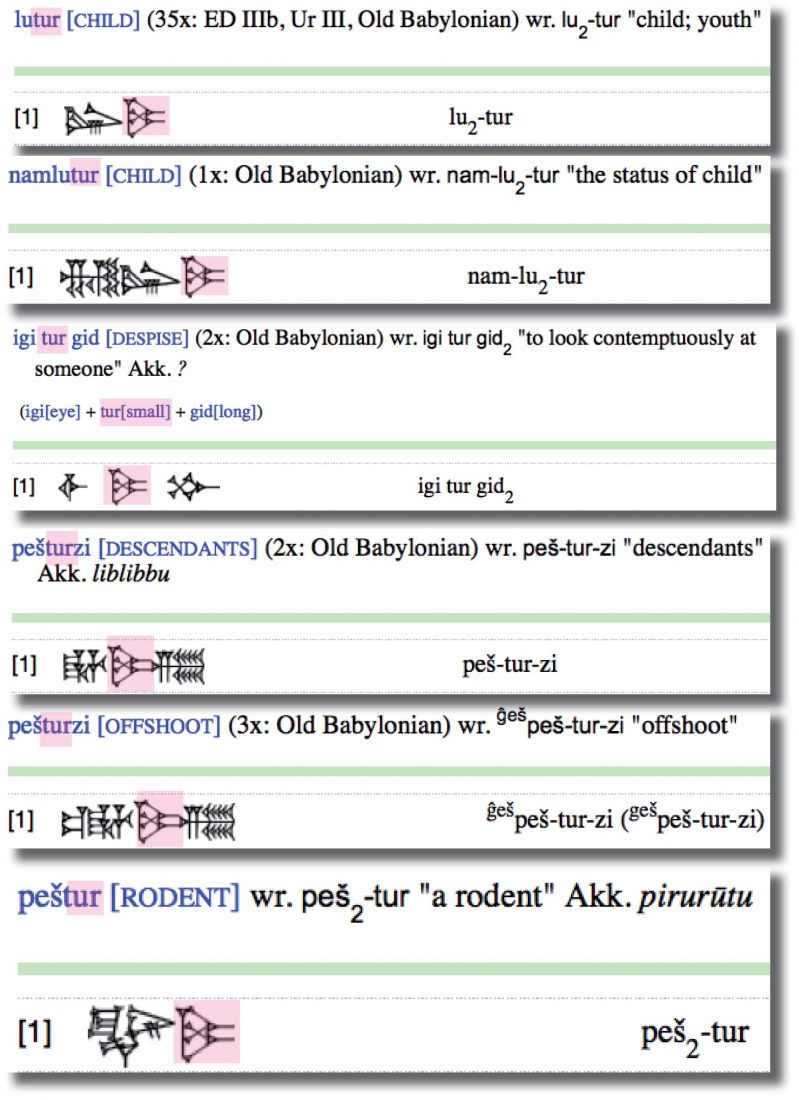 Note the relationship of rodents to descendants, and snakes to in-laws. Jared Diamond writes, “A slight change in pitch converts the meaning of the [New Guinea tribe] Iyau word meaning ‘mother-in-law’ into ‘snake.’” (The Third Chimpanzee, page 150.) Interesting that all these cultures would consider in-laws and children vermin. 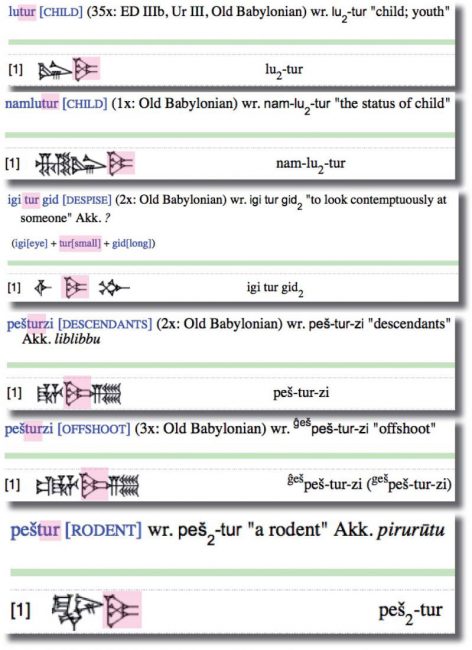 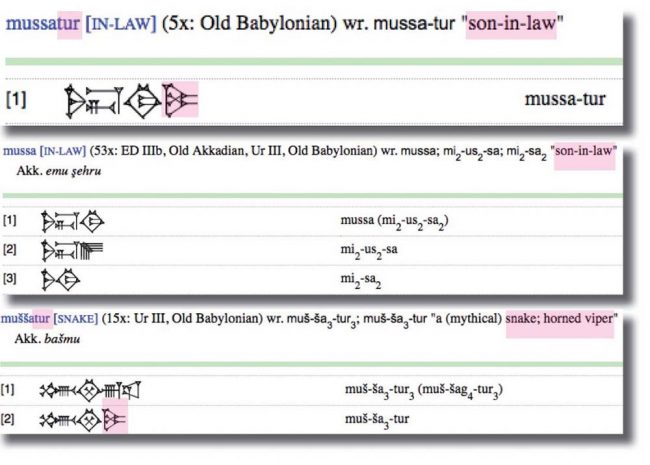 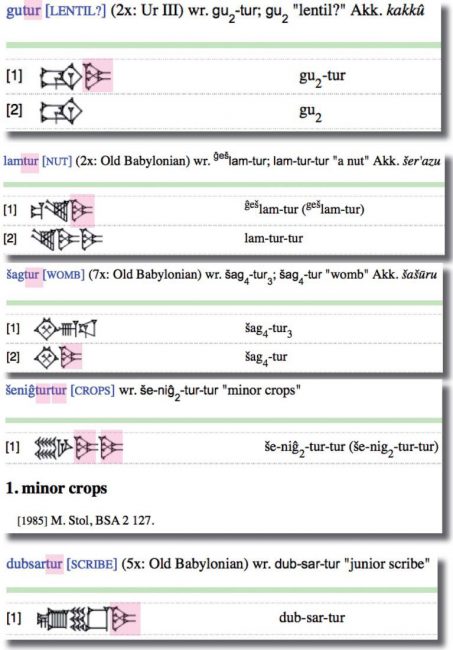 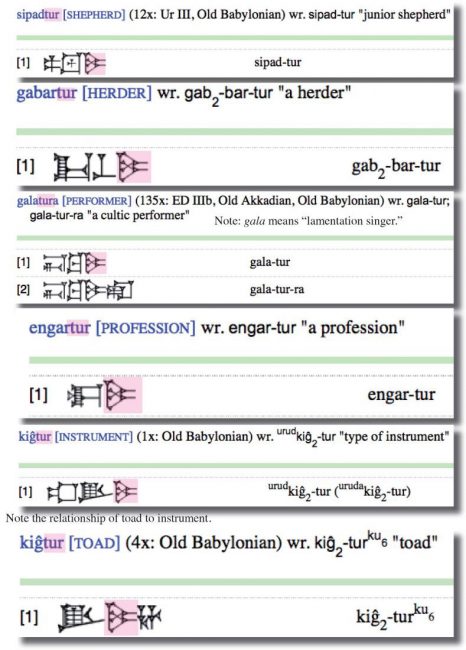 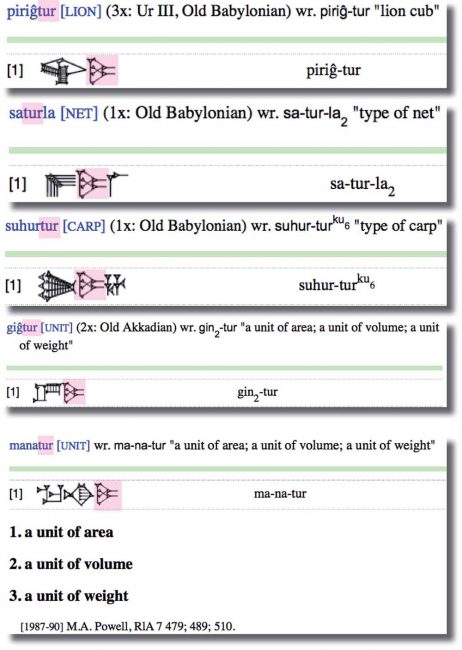 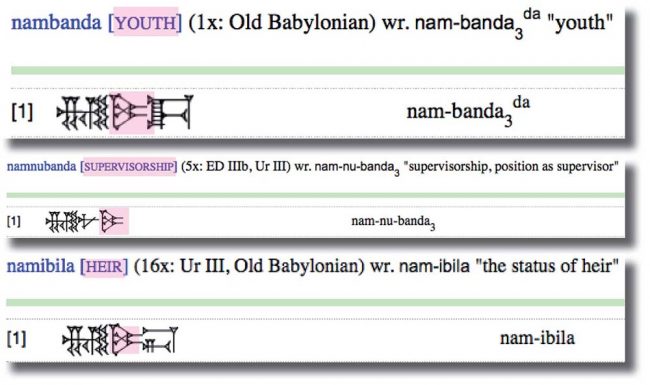 Genna would seem very close to “gene” and “genesis.”

Even the word for “staircase” has a breast depiction, perhaps because children grow up like stairs ascend. Humans are big on metaphor. It’s why we can take scratchings, like cuneiform or letters, and extrapolate meaning from them. For more on stairs in “‘Tail’ = ‘Kun’ in Cuneiform.” 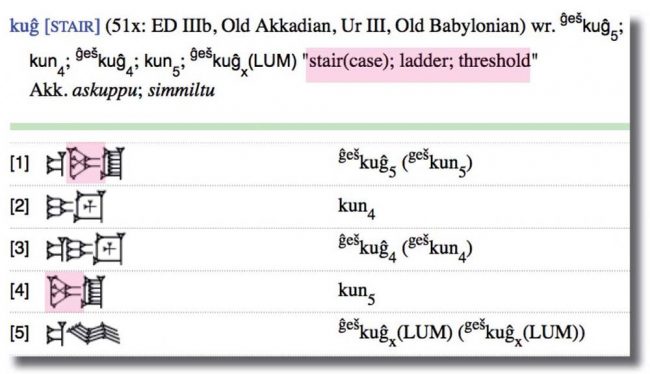 Could “diddly squat” have come from the Babylonians? 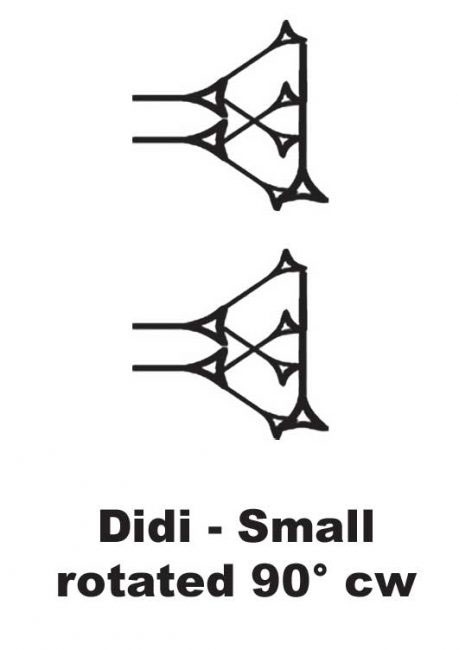 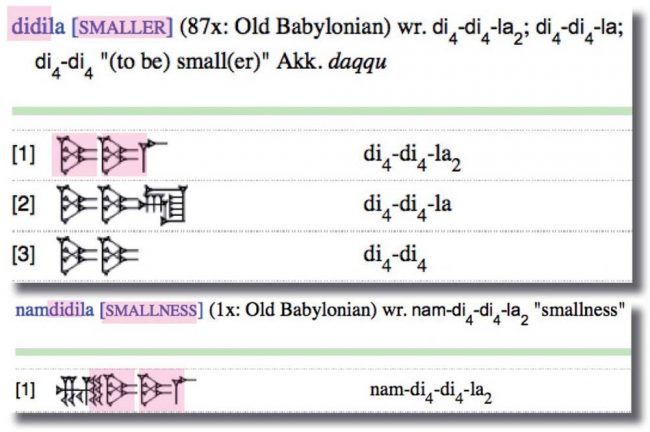 This means “official smallness.” Economics ruled the Sumerians, and everything was accounted for, even smallness.

Didi meant “small” in cuneiform. When things are small, you might have several, like children or wives. When you have several of something, they lose their importance and become, “insignificant, trifling,” as Oxford English Dictionary defines, “diddly” admitting that the etymology is “uncertain.” “Ama” means “mother”: a person known to have breasts and milk.

From the Smithsonian website: “There’s certainly evidence that women had tattoos on their bodies and limbs from figurines c. 4000-3500 B.C. ….Although it has long been assumed that such tattoos were the mark of prostitutes…I personally believe that the tattooing of ancient Egyptian women…functioned as a permanent form of amulet during the very difficult time of pregnancy and birth. This is supported by the pattern of distribution, largely around the abdomen, on top of the thighs and the breasts…”1 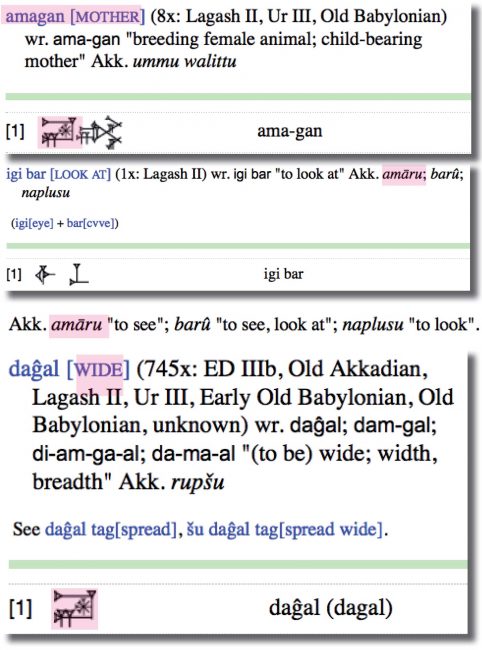 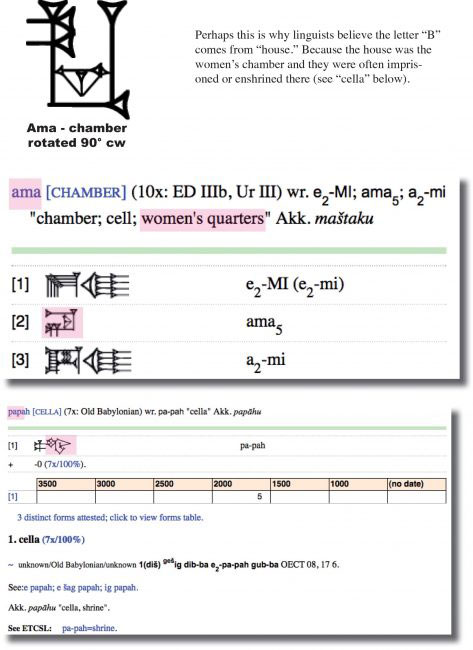 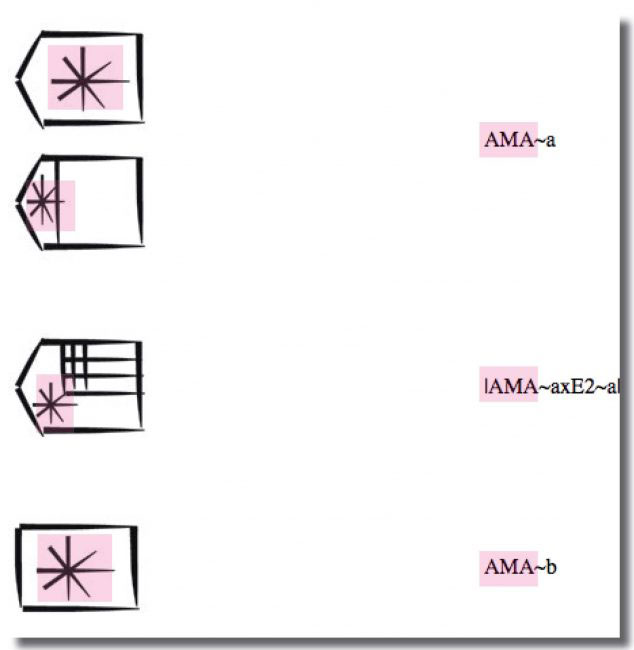 By itself, the star is pronounced an. From an to ama isn’t that far away. Stars and milk are both white, but milk would have mattered more to early humans. A woman who let one nurse might be a goddess. It might be grotesque to us, but that doesn’t mean it didn’t happen.

In the definition below, the an star appears to be synonymous with the nursing nar woman. This would suggest: 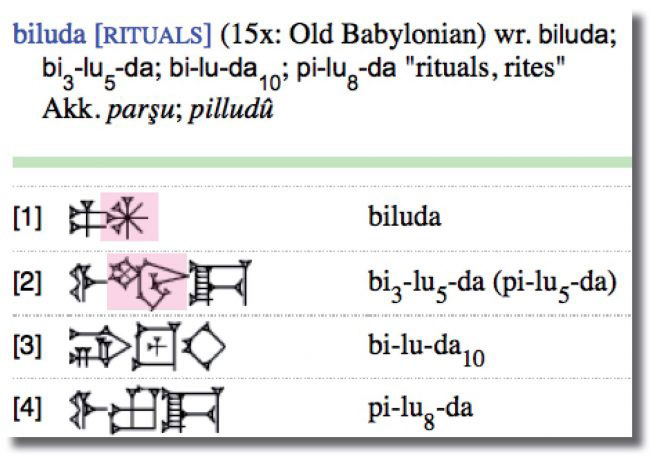 This looks like a woman holding up her breast. This woman is “nar” 643 times. Could this word mean “nurse”? Perhaps “musician” is a euphemism. To the Sumerians, goddesses were musicians with milk. 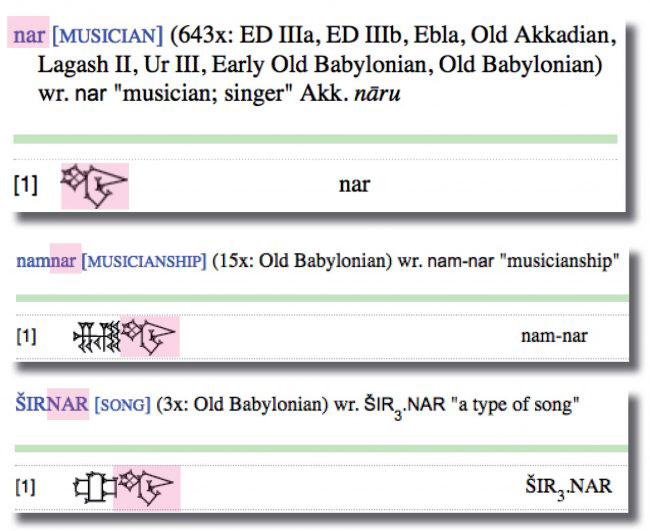 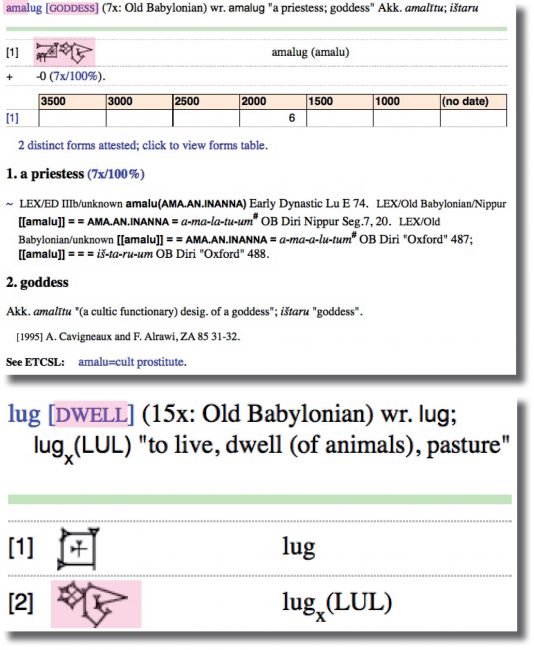 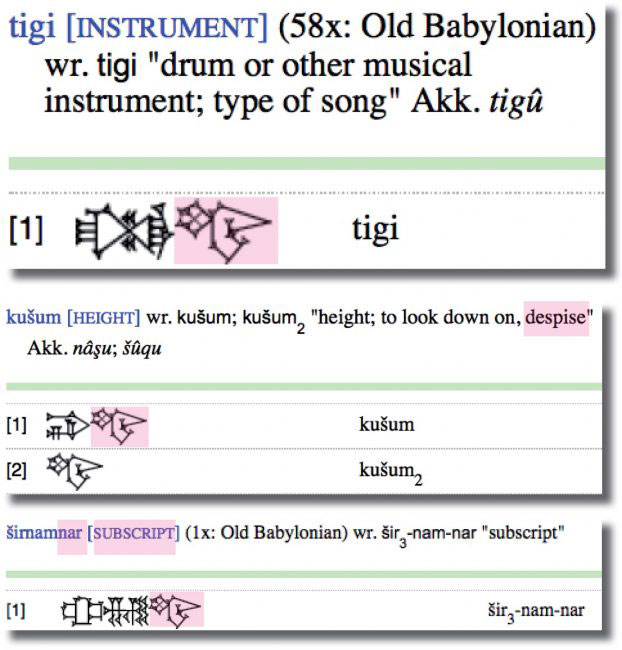 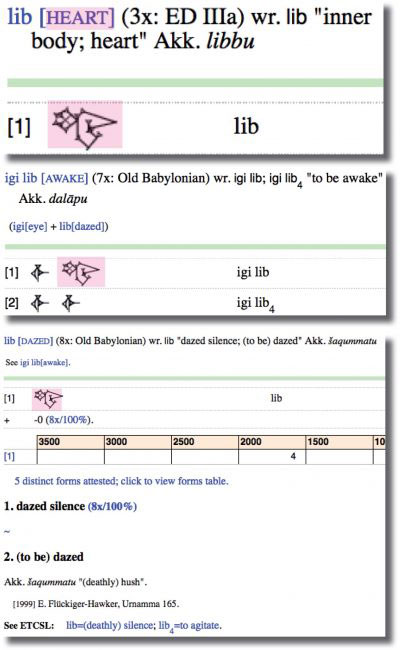 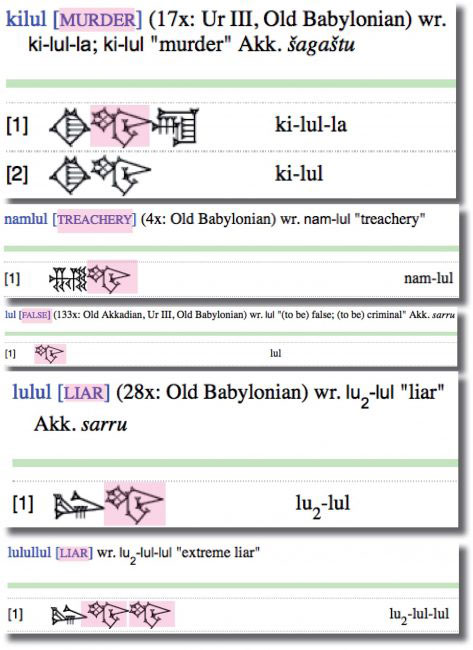 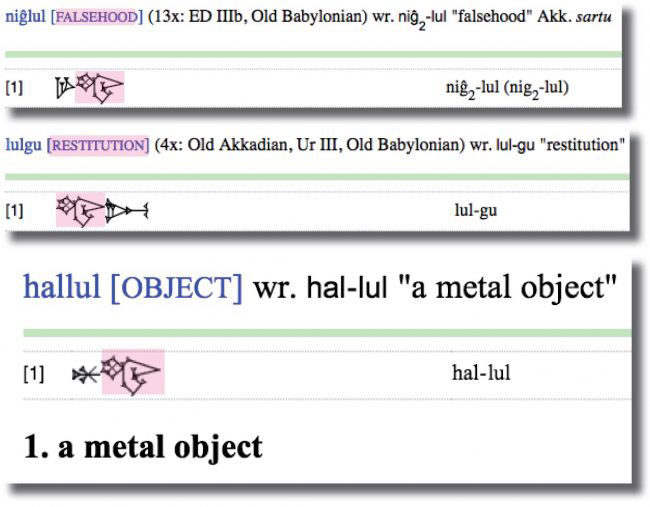 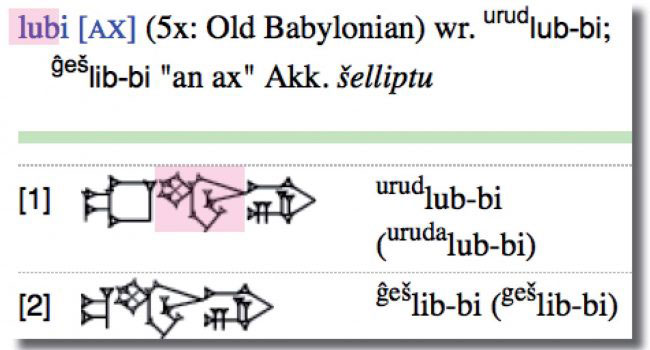 The definition below doesn’t have the nar/ka’a/lib/lul women, but it is a homonym to the word meaning “ax” above , and it means “dear.” In English, to be “smited” means both to be killed and to be in love. 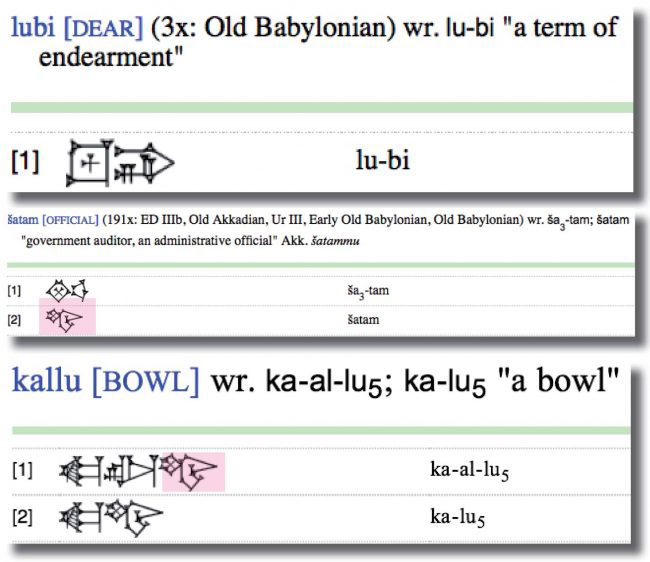 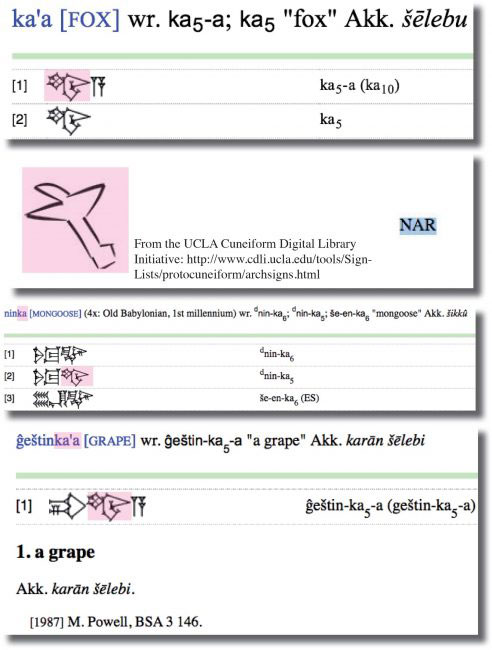 The roots of “lactate”

Chinese, Sumerian, and Ancient Egyptian all “re-clarify” characters and meanings in order to make their characters have clearer definitions. 빛따 is “butterfly butterfly,” but it only means one. If half the country knows one character and the other half knows the other, you get more buy-in when you meld the two. Also it’s rare to see lone butterflies. Similarly 툉堂 is “friend friend” but means simply “friend” because it’s impossible to be a lone friend. There is a lot of replication or “overclarification” in language. Could the word “lactate” be a re-clarification of the Akkadian laga “milk” plus the Ancient Egyptian word for “milk”—TT? “Milk” in Greek was gala, just a flip of the syllables from laga. In Sumerian gala meant “female lamentation singer” and “vulva.” Because women have so many synecdochical associations (breasts, vagina, milk, offspring, sex, etc.), it is sometimes hard to track a particular sound/meaning relationship unless we widen the associations of “female” to account for all of these associations. So laga, meaning “vulva,” can still retain a “milk” association because historically an individual with a vulva also could have easily possessed milk. Laga constitutes the first syllable in “lactate.” (Also consider “lake,” “lacrimate,” “shellac”: all have liquidity.)  The second syllable is more obvious: teat. The mammal receptacle of milk.  In Ancient Egyptian, irtt meant “milk” or “to make tt (titty).” The word “lactate” could be re-clarified with two terms for milk: laga teat. So “lactate” could mean “milk tit.” Language is very logical, it’s just not the logic we prefer.