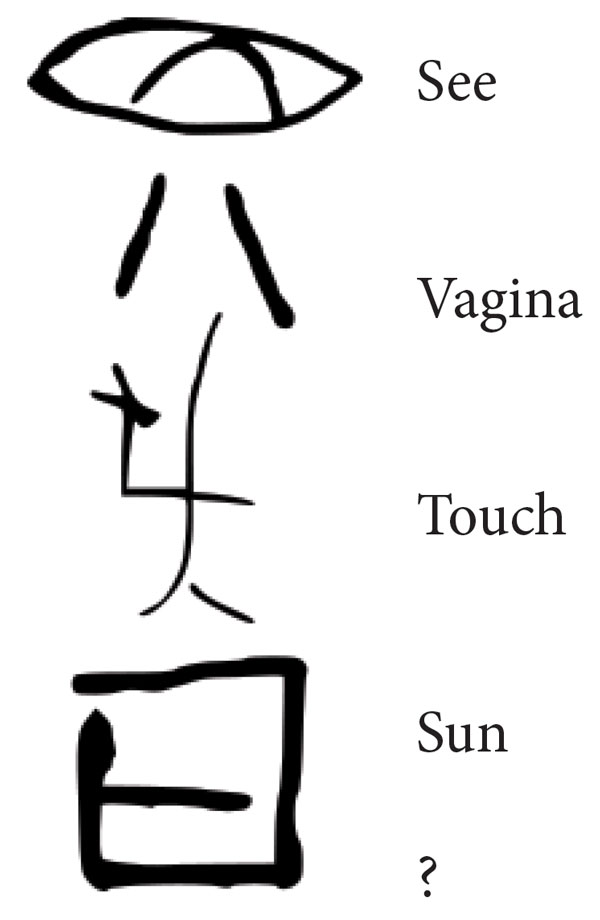 Could this mean “See vagina, touch the sun?” Life was brutish and short. Sex was as pleasurable then as now. There weren’t many of us then. There are 7.6 billion of us now. We didn’t walk here. Sex is how that happened. A focus upon sex is encoded into written language, creation myths, and cultural stories.

In Chinese, a common type of sentence is four characters; this four-character sentence is known as a “chengyu” 成语. A chengyu is not dissimilar from the summing up sentence of an Aesop’s Fable: the phrase “sour grapes” means that a person who states she doesn’t like something often claims this as a result of this person’s inability to obtain that thing. This is based upon the fable of the fox who cannot reach the grapes, and therefore decides that they are not tasty. In Chinese, “jing1 di3 zhi1 wa1” 井底之蛙 refers to the frog at the bottom of the well. This is the summing up sentence (literally “well bottom of frog”) of a story about the inability of a frog to see past the limits of its well wall boundaries. We have a similar expression in the West: tunnel vision.

Could the Jiahu Symbols be a similar summing sentence: four characters to explain a story that everyone already knows?

The association of 八 with “vagina” is not unprecedented. We find it in the vulgar phrase “wangba” 王八, which means “cuckold” or literally “king eight.” However, the right shape suggests “vagina” rather than “eight.” This “8/vagina” relationship is seen in the vulgar word “bi1” 屄, which means “cunt.” (To understand language, one has to be willing to look at all the words, even the ones in the gutter.) A substructure of “bi1” is “xue” 穴“cave”: the word for “cunt” can be argued to literally depict “bottom cave,” which is an offensive way of describing a vagina. Crude though this may be, it is imminently logical. The word “xi1” means “naughty, inferior” in Cantonese, which shares a negative connation with this vulgar word for “vagina.” The word 肹 “xi1 bi4” means “vulgar, abusive term for female sex organ, cunt” in Cantonese. The word “rou4” 宍 means “flesh; meat,” the word means “chin” in Cantonese. Could the association of similar orifices—vagina and mouth—provoke this “chin/cunt” connection?

The character that means “sun” “ri4” 日 is also in the word for “prostitute”: “chang1” 娼. Many words reference sex and female body parts because that’s what men focus on, and men wrote language while women were dying in childbirth and raising children.

The similarity in shape between the number “8” and the sign for “infinity”: ∞ must be addressed. Shape appears to be more significant than orientation because these are essentially the same form, just rotated 90° orthogonally from one another. Infinity is all about seeing forever. The infinity symbol resembles eyes. Eyes resemble breasts; they’re both targets: a dot inside a circle. The number 8 (eight) is a homonym with the past tense of “eat”: ate. Literate civilizations’ love of large breasts is a capacity issue: large breasts means abundance of milk, and therefore healthy children. “Ate/Eight/8/∞” has everything to do with female mammals.

So both “8” and “∞” can signify for breasts. Synecdoche is a figure of speech where the part represents the whole (or vice versa). For example, “the sails on the horizon” signifies for ships, not just sails. In a similar fashion, breasts and vaginas signify for female mammals. Eyes are important, but breasts have milk, and that bounty has driven written language.